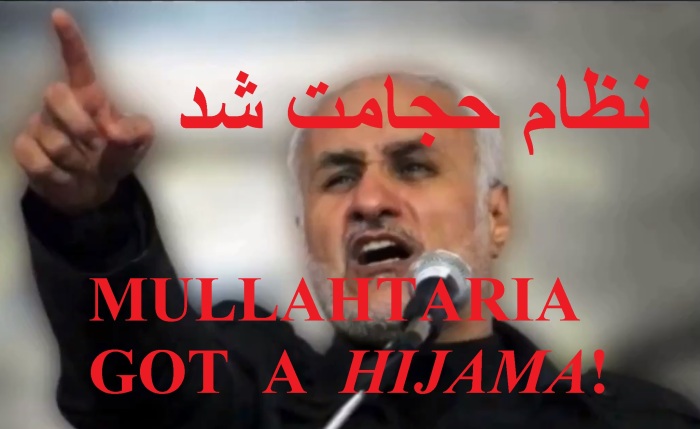 The process of extracting accumulated, or trapped blood from underneath a person’s skin, often in the back below the neck area, is called «Hijama,» or «Hejaamat.»

It is a traditional practice that involves making an incision and getting blood sucked out due to induced vacuum in a small jar or a drinking glass and so forth that is inversely put over the target location above the skin. I am sure relevant videos can be found.

People who are into that practice, believe that the said blood is very bad, corrupt, dirty, and surely causes a plethora of illnesses. Therefore, it is understood that if at all possible, it would behoove one to get a Hijama.

While a Mullah may swear to Quran that Hijama therapy is the next best thing to attendance in the Friday prayer for a Muslim to do, I am not really writing this to dispense with random information about it.

Rather, I am trying to facilitate a suitable context for a clear understanding of the kind of monstrous mindset that is in charge of a human travesty that the world knows as the Islamic Republic of Iran- a cabal of horrendously homicidal criminals who have held Iran’s totality, and the region’s peace and stability, hostage for over 40 years.

Hijama’s pertinence in this writing is to what Hassan Abbasi said in reference to the bloody massacres and widespread killings of protesters that the regime forces committed in the recent nationwide unrest.

Abbasi is one of the evil Ayatollah’s particularly nasty minions who thinks so highly of himself that it is said one day he simply recognized himself as worthy and deserving of the title and started carrying the title of «Dr.» with his name since then on!

He heads his own Think Tank in the service of the regime, and is iconic with the display of fiery critiques and opinions from his pulpit. In his delusions of grandeur, he is none other than the so-called «Kissinger of the Islamic Republic!»

Having considered Abbasi to be an absolute arse ever since I first listened to his rants, normally, not only I would consider it a waste of my time and pointless to write about that dangerous clown and his vile verbiage, as I would keep him absent from my literature and periphery, but I would also despise the thought of giving that crazy chump any recognition at any level. They say after all, that there’s no such thing as bad publicity…

But what compelled me to draw my pen out to paper on this lost soul this time, are his recent statements regarding the massacres and killing of protesters in the recent national uprisings in Iran, Iraq, and Lebanon by the IR goons, proxies, and troops. What he said was so outrageous that it had to be emphatically highlighted for and clearly explained to the English speaking world.

Abbasi tried to analogize the bloody murders of protesters who were gunned down in cold blood, down to a trivial act of Hijama therapy as I explain below.

«The system received a Hijama. A little bit of dirty blood was let out of it, just as [we did so] with the Lebanese [protests by Hizballah] and in Iraq last month [by IR’s proxies]. The ‹Enemy› failed to achieve its goal [of harming the Islamic Republic],» the fake Doctor said.

Indeed he is no Kissinger, for Dr. Henry Kissinger has nothing in common with that lunatic. However, I have no issues with calling Abbasi the Joseph Goebbels of his dastardly regime!

I say so, because while word play to manipulate the minds of people is his natural game, he systematically utilized the common knowledge and psychology that is associated with the concept of Hijama in the propaganda he produced to support of the regime’s killings.

He used the word Hijama, because:

a – He is well aware that a lot of people think very positively of ant trust Hijama a therapy.

b – Those who do get Hijamas, most likely adhere to old school traditions and Shiite ideologies, and naturally, their comfort zone is in patronizing the regime and supporting it at all costs.

c – The procedure is considered to be no big deal and commonplace.

d – Generally, blood is considered to be impure and shouldn’t be touched. Thus, Hijama blood would rate as quite abhorrent!

Thus, as he certainly knew all of the above about Hijama, Abbasi tried to use the concept to trivialize, if not sanctify, the spilling of the blood of the innocents in the streets, and portray their slaughter as a matter that more than being condoned, it was approved, commendable, beneficial, and necessary.

Does that not demonstrate the depth of his and his bloody regime’s depravity?…

Does it not bespeak the unfathomable dimensions of the Islamic Republic travesty?!

How long is the world going to stand aside and let the Khomeininst henchmen kill and maim defenseless people as they wish, while continuing to further their ability to bring death to millions?…

Down with Abbasi, and down with the Mullahs and their evil regime!

Piyalechi pledges allegiance to the Flag of the United States of America, and to the Republic for which it stands, one Nation under God, indivisible, with liberty and justice for all.

Piyalechi.com’s owner is a man who is proud and grateful to be an American citizen. He immensely enjoys and appreciates the fact that he has the right to exercise his freedom of expression through this medium and any other, it being guaranteed and protected by the First Amendment of the Constitution of the great and blessed United States of America.

He intends to take his freedom of expression to maximum benefit and personal pleasure, albeit within the limits defined by his knowledge of relevant laws and ordinances applicable to him per his geographical location in the U.S., and certainly within the boundaries a reasonable person would appreciate and thus respect and as such characterize in common human decency and accepted norms of a civilized person’s benevolent behavior.

His expressions will consist of sharing his thoughts and intellectual reflections on various subjects and matters of his interest at any given time, in this legally acquired and utilized media venue named “Piyalechi.com”.

Moreover, Piyalechi hereby emphatically states his commitment in his craft to abiding by what reasonable persons would define as reason, kindness, compassion, and all that’s conducive to a positive and harmonious existence and playing in a level field in human terms, in our planet.

Please use my email below to communicate any rant or rave, concern, problem, or suggestion you may have associated with this site and/or its content. You can also use it to offer me a nice paying  job!

In regards to copy rights issues, if there should ever be any:

Keeping in mind that this site is evidently not a for profit venue, I, totally aim to keep my Karma clear of copy rights of others by adherence to  «fair use.»

If you think that your right to your intellectual property is being infringed upon in any way in piyalechi.com, please inform me via the email address below, and I will take immediate action to mitigate the issue and keep my Karma straight with you.

I, who write as the «Piyalechi» for this site, would be most honored to consider any request for help or cooperation.

I am a veteran of not just language translation, interpretation, editing, and content production.

Piyalechi is available for consultation, by appointment.